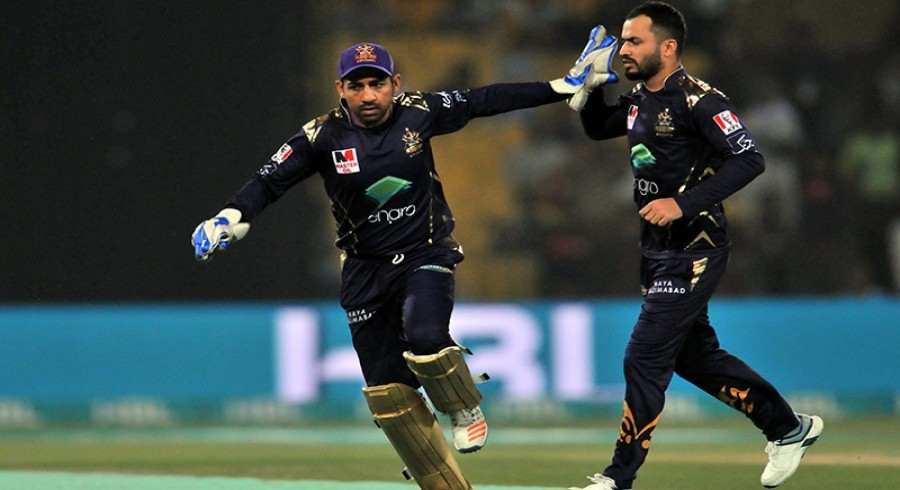 Chasing a target of 159, Qalandars suffered an early blow when Usman Shinwari dismissed their captain Sohail Akhtar in the first over.

Mohammad Hafeez tried to play a leg glance to Shinwari but could only find a leading edge to a slower ball, which went straight into the hands of Azam Khan, thereby reducing Quetta to 27-3.

Khurram Shehzad also struck in his first over as Zeeshan Ashraf was caught behind for 16.

Everything was going right for Quetta as Mohammad Nawaz removed his nemesis from previous season, Ben Dunk, early with a ball that turned back sharply and crashed into the stumps.

Nawaz kept bowling straight and reaped dividends as Rashid Khan missed a straight one and was clean bowled for 8.

Shehzad picked his second wicket as he dismissed Ahmed Daniyal for 3.

As wickets kept falling at the other end, Tim David kept the scoreboard moving for Qalandars through his blistering knock.

David was sprinting towards the target, but couldn’t take Qalandars over the line as he was caught behind for 46 on the final ball of Shinwari’s spell.

Earlier, Lahore Qalandars restricted Quetta Gladiators to 158-5 after winning the toss and opting to field first.

James Faulkner struck in his first over for Qalandars again as Quetta opener Usman Khan found the only fielder on the fence on the off side and was caught for a duck.

Jake Weatherald was initially cautious after losing his opening partner early, but upped the ante in the final over of powerplay as he scored 16 runs in Faulkner’s third over.

The end of powerplay didn’t slow down Weatherald as he smashed Haris Rauf for a couple of boundaries.

Rashid Khan worked his magic in his first over as Cameron Delport was beaten all ends up and departed after scoring 10.

Mohammad Hafeez continued his dominance over left-handers as he brought an end to Weatherald’s 48-run knock.

Azam Khan made his intentions clear as he smashed Haris Rauf for 18 runs in an over.

Azam sprinted to 33 but mistimed a slow delivery from Faulkner straight to Fakhar Zaman.

Faulkner finished with his third three-wicket haul in his fourth PSL game as he removed Mohammad Nawaz through a caught and bowled.

Gladiators were banking on their captain to provide a strong finish and he responded with an unbeaten 34-run knock from 27 balls, to take his team to a competitive total.