England were 286-9, still needing 73 more runs to reach a victory target of 359 when last man Leach walked out to bat 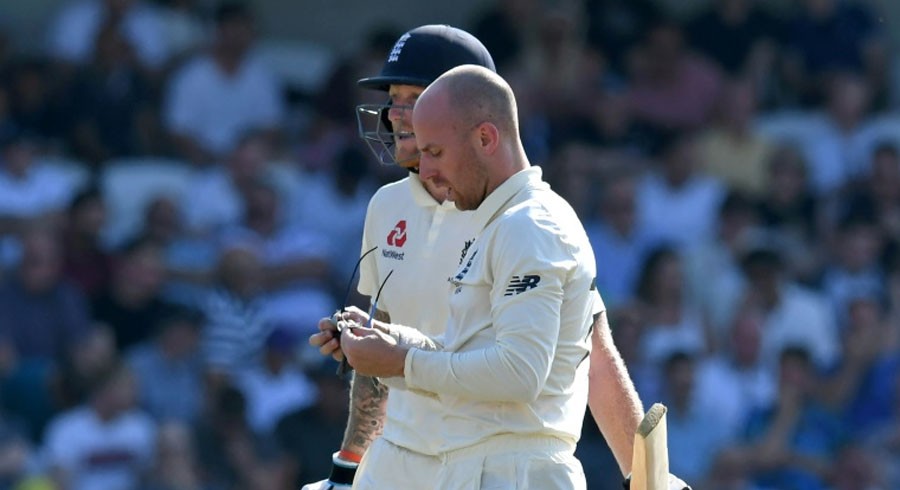 England spinner Jack Leach put his cult hero status down to looking like a "village cricketer" after his key supporting role enabled all-rounder Ben Stokes to steer England to a staggering victory in the third Ashes Test.

England were 286-9, still needing 73 more runs to reach a victory target of 359 when last man Leach walked out to bat at Headingley on Sunday.

Already something of a crowd favourite, the bespectacled and balding Leach held firm as all-rounder Stokes, who was 61 not out when joined in the middle by the left-arm spinner, blazed his way to an astounding unbeaten 135 that saw England to a one-wicket win that levelled the five-match series at 1-1.

But just as Ian Botham's 149 not out in England's celebrated 1981 Test win over Australia at Headingley after following-on needed the support of Graham Dilley, and Kevin Pietersen's Ashes-clinching 158 at the Oval in 2005 would not have been possible without Ashley Gile at the other end, so too did Stokes need Leach to stay with him during what became a remarkable last-wicket stand of 76.

Even though Stokes farmed the strike superbly, Leach — whose career average of 11 matches his position in the batting order — still had to face 17 balls for an invaluable one not out.

But having made 92 as nightwatchman in a Test against Ireland at Lord's last month, Leach hung in for an hour.

His only real scare came when, with two needed to win, he nearly ran himself out only for off-spinner Nathan Lyon to fail to gather a return when Leach was yards short of his ground.

Leach, however, tied the scores before Stokes struck the winning boundary off fast bowler Pat Cummins.

The sight of Leach carefully polishing his glasses as England closed on their record fourth-innings winning total also endeared him to the crowd.

"It's nice to have that, it's probably because I look like a village cricketer out there, in my glasses and with the bald head," said Leach.

"Maybe people think 'that could be me' because all the others look pretty professional."

Leach, whose tailend resistance has seen him offered free glasses for life by series sponsors Specsavers in a response to a suggestion on Twitter from Stokes, added: "I'm just enjoying playing for England."

The 28-year-old said his careful cleaning routine was simply about removing condensation as he faced up to an Australia attack led by fast bowler Josh Hazlewood.

"I just had to make sure they were clean every time I was facing up," said Leach.

"I would really regret it if they had been smudged and I'd got out, then the cameras zoom in on the glasses and they say 'he didn't clean his glasses'. I just had to stay calm and do the job at hand."

When Leach came into bat, it seemed England's chances of a win had evaporated.

But having seen, albeit as a fan watching television, Stokes star in England's World Cup final triumph against New Zealand with 84 not out at Lord's six weeks earlier, Leach had faith even when all seemed lost.

"I was watching the World Cup final as a fan and that showed that anything is possible," he said.

Leach would have likely been watching the Headingley match on television too had not rival spinner Moeen Ali been dropped after a woeful display in the series opener at Edgbaston.

With World Cup-winning leg-spinner Adil Rashid injured, Leach suddenly found himself unexpectedly thrust back into the Test side.

"I probably thought I'd be watching the Ashes at home," he admitted.

"But I wanted to be ready to play and not presume anything. Now my opportunity has come about so I'm trying to make the most of it."